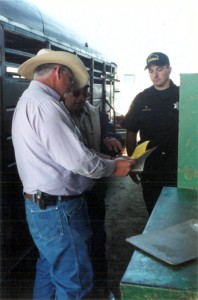 Cattle rustling may seem like a crime of yesteryear, but it is still a part of the agricultural landscape today. That’s why the California Department of Food and Agriculture’s (CDFA) Bureau of Livestock Identification keeps careful track of the sale, transport and slaughter of cattle. The bureau’s inspectors protect livestock and help ensure the safety of California’s food supply by verifing the legal use of brands, documentation and other forms of identification.  On occasion, inspectors also assist their colleagues in other states when cattle rustlers hit the road in hopes of selling stolen cattle here.

On cattle rustling cases, inspectors may gain important clues when a rancher notices something out-of-place – an unfamiliar brand or a seller whose story doesn’t quite sit right. It often comes down to good, old-fashioned leg work and cooperation with colleagues in other agencies to identify the bad guys and track them down.

That’s how it went with a recent rustling case, which began on October 23, 2012, when a CDFA special investigator received a telephone call from a special agent with the Oklahoma Department of Agriculture looking into the theft of 14 calves.

The bureau’s investigator then contacted the Los Angeles County Sheriff’s Office with the details on the suspects. Shortly thereafter, Los Angeles deputies arrested three suspects, who were charged with animal cruelty and vehicle theft and now face extradition to Oklahoma to answer to other charges, including cattle theft.

Interstate cooperation is a mainstay of CDFA’s efforts to protect our state’s livestock.