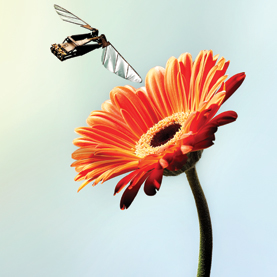 In a time of genuine bee crisis — CCD, neonicotinoid pesticide questions and varroa mite — the promise of mechanized bees is tantalizing, yet seemingly farfetched, even in an age of nanotechnology and genetic modification. For some, the idea of robotic insects carrying out nature’s perfect pollination system is agricultural heresy.

Heresy or not, researchers at the Harvard Microrobotics Lab believe they are close to bringing robot honey bees into action, maybe within a few short years — honey making is out, but pollination services are in.

The Microrobotics Lab has been working on the development of the “Robobees Project” since 2009. The prototype bee design, called a Mobee (Monolithic Bee), is built in “pop-up book” fashion, with layers of lightweight material forming the body. As described by Harvard: “In prototypes, 18 layers of carbon fiber, Kapton (a plastic film), titanium, brass, ceramic, and adhesive sheets have been laminated together in a complex, laser-cut design. The structure incorporates flexible hinges that allow the three-dimensional product — just 2.4 millimeters tall — to assemble in one movement, like a pop-up book.”

The Mobees barely have a physical shred of resemblance to bees — more like a tiny box with wings, but their structure is aimed toward functionality and not looks. Could the Mobees be programmed to autonomously fly from flower to flower as artificial pollinators? The Harvard team thinks so and the Mobees frame is built for sensory modification. “Now, I can put chips all over that. I can build in sensors and control actuators,” says Mobee designer Pratheev Sreetharan.

The weight, flight and control potential of the Mobees make for fascinating and hopeful conjecture, but far from a laboratory, could a robot bee function in an almond orchard? And even if functional, would the possibility even be financially viable? If robot bees are developed to a functional stage integrating flight control and sensory ability, the Harvard team likely will have created a miniature drone. An NPR report draws a direct line between robot bees and surveillance: “The real question hanging in the air, so to say, is how the bees themselves might be used once they’ve been endowed with the power, sensor and control mechanisms needed to fly and operate on their own. The obvious answer is surveillance of all types, whether it’s for the military in combat or scientists tracking changes in the environment or spooks keeping tabs on their targets.”

It’s easy to scoff and cast off the idea of industrial-scale production of robotic insects as the realm of dreamers, but lessons learned from technological advances over the past 100 years should mute such criticism. It’s far better to let time be the judge.

3 Responses to Honey Bee Robots – from the Western Farm Press