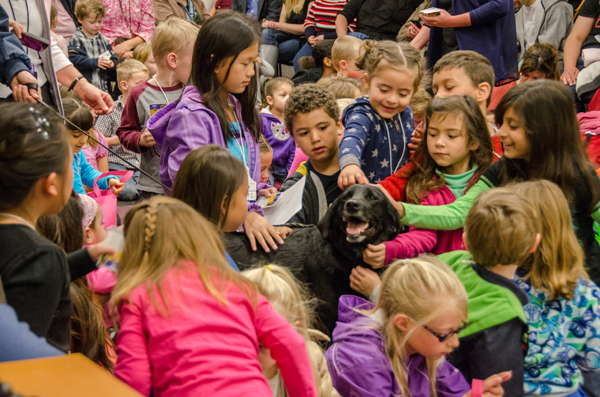 There has been a changing of the guard this summer among the California Dog Teams – comprised of specially trained dogs that sniff parcels and are part of the state’s first line of defense against invasive species. Three veteran dogs retired after many years of service, each having reached the mandatory retirement age of nine. Using the concept of “dog years,” that would make them between 56 and 61 years old in human terms. A fourth dog retired when its handler was promoted – that’s necessary because the program requires a replacement handler to train with a new dog to forge the strongest possible bond.  All of the retired animals were placed in loving homes to live out their lives.

The first dog, Bart, worked alongside handler Mariah de Nijs in Contra Costa County. The second dog, Bella, also sniffed parcels in Contra Costa County, teaming up with handler Ceciile Siegel . The third dog, Friday, put its nose to the test with handler Jeremy Partch in San Diego County. And the fourth dog, Ebony, worked in Los Angeles County. Fortunately for California, each of these dogs has been replaced by new, able-nosed young canines. The rookies are named Venus, Conan, Cairo and Sedona, and some of them are already hard at work at parcel facilities – part of a crew of 13 dog-handler teams around the state.

The California Dog Teams enhance the inspection and surveillance activities of plant products entering the state via parcel delivery facilities and airfreight terminals. Once fully trained, dogs are able to alert their handlers to marked and unmarked parcels that contain agricultural products, allowing biologists to inspect for unwanted pests that pose a threat to California’s food supply and natural environment. Every canine that enters this program has been rescued from animal shelters, breed rescue groups, and other pet rescue organizations.

Between July 1, 2011 and June 30, 2012 the California Dog Teams alerted inspectors to 41,002 marked and unmarked parcels that contained agricultural products. A total of 124 actionable pests were intercepted during this period (An actionable pest may be a pest of economic or environmental concern and is either not known to be established in California or it is present in a limited distribution that allows for the possibility of eradication or successful containment). Additionally, 1,948 package rejections were issued during that time period for violations of state and federal plant quarantine laws and regulations.

The California Dog Teams serve as a vital and indispensable part of protecting California’s agricultural and natural environments from invasive species.