Hackers, food access and government – an unlikely partnership – from the Los Angeles Times 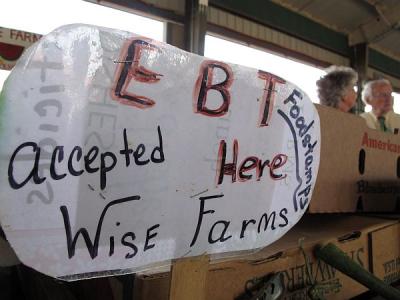 The hackers group Code for America is trying to improve food access by streamlining the process for applying for SNAP benefits, or food stamps.

On a recent day at work in a San Francisco loft, Moncef Belyamani was sporting a hipster “LOVE” T-shirt and riffing, with obsessive detail, on the evolution of vinyl record production.

The Android coder and sometime dance-club DJ wrapped up by explaining how Google’s language translator could be rigged to produce an excellent beat-box.

Belyamani isn’t exactly the kind of guy you expect to bump into in a government building. But if you happen to be hanging out in San Mateo County offices, that’s exactly where you’ll find him many days.

The 38-year-old is part of an experiment in municipal government driven by hackers like him who want to help make the public sector as responsive as the Yelp app on a smartphone.

From their buzzy loft, these 28 tech wizards spend their days tapping on laptops, scribbling formulas into spiral notebooks and “ideating” — hacker-speak for tossing ideas around. Then they fan out across the country, embedding themselves within the beige conference rooms, dense procedure manuals and maddeningly slow pace of the machinery of municipal government.

They call themselves the Peace Corps for Geeks.

Code for America, as the nonprofit they work for is called, condensed its improbable mission down to a few words in its recent annual report: use technology to make government “simple, beautiful, easy to use.”

In Boston, for example, thousands of hydrants were getting buried in snowstorms, obstructing firefighters. A Code for America hacker built an app so Bostonians could “adopt” a hydrant and agree to keep the snow off it. The app isn’t just functional. It’s fun. It went viral.

Honolulu seized on it. Folks there adopt tsunami sirens, keeping their batteries fresh. Seattle citizens began adopting storm drains to unclog. At least nine cities have built on Code for America’s work to create “Adopt-a” apps. It’s as the group intended: The code is open source, and anybody interested is encouraged to rehack it.

Rarely do things work so organically in the public sector, a place of rigid org charts, layers of contracting rules and bewildering cost overruns. There are bureaucracies within bureaucracies and computers so old that nobody makes the parts anymore.

“I started a program to try to get the rock-star tech and design people to take a year off and work in the one environment that represents pretty much everything they’re supposed to hate.”

The Code for America fellows, as they are called, have been lured to this aggressively unhip domain by Pahlka, a Bay Area innovation fanatic.

Hers is a quintessential California story. The charismatic 43-year-old Yale grad from Maryland fell into the tech world by happenstance and built a brand around evangelizing outside-the-box thinking.

Pahlka easily blends with any other activist you might bump into at a Berkeley farmer’s market. She has a taste for eclectic patterned clothing, singer-songwriters and sustainable agriculture. But her lack of conceit is disarming. Light conversations with her quickly become intense.

Pahlka and her 10-year-old daughter, Clementine, raise eight chickens. One is named Lady Gaga. Another is Hillbilly.

One thing Pahlka doesn’t know how to do is code. It’s her “dirty little secret,” she jokes.

But that doesn’t matter to some of the most talented coders in the world, who insist few people better grasp its possibilities.

It bothers Pahlka that people can perform complex financial transactions across continents on a smartphone but often can’t get a municipal parking permit without a long wait at City Hall.

She had previously run from government, after working in a social services agency and finding little room for new ideas. “I felt like I was part of a broken system,” she said.

She left to travel Asia, and upon her return the only job she could find was organizing conferences. Her task was to set up events for gaming coders, throwing Pahlka into the hyperkinetic swirl of Silicon Valley. Her taste for big ideas and tearing down institutional borders served her well there, and she caught the attention of tech industry giants.

By 2008, some of her mentors were being tapped by the incoming Obama administration. Their mandate in Washington was to export the methods of lean tech startups to lumbering federal bureaucracies.

But for all the big ideas being bandied about Washington, it still wasn’t getting easier to get a parking permit. A friend who worked for the mayor of Tucson kept impressing upon her how a few cleverly designed apps could reshape a city’s relationship with residents.

Pahlka persuaded the Sunlight Foundation, a nonprofit focused on harnessing technology to make government more transparent, to give her $10,000 in seed money to explore the concept. Other foundations, including Google’s, would later line up with much bigger checks.

Pahlka was soon putting the word out in the public sector that local governments could apply to bring a team of hackers on board for the year. Cities would commit to paying $60,000 to cover a stipend and expenses for each fellow they bring on. By 2011, she was embedding coders in Boston, Philadelphia and Washington, D.C. — and Code for America became a movement.

The White House has noticed Code For America’s triumphs. In May, Pahlka announced she was leaving for a year to help direct government innovation efforts for the Obama administration.

Before she left, Pahlka embedded three teams in California. In Oakland, the task is getting the public faster and better access to government records. In San Francisco and in San Mateo County, hackers are trying to figure out how to help enroll more residents for social services, particularly food stamps.

“If you look at what they did elsewhere, it involved some of the big, hairy, audacious goals of government,” said Beverly Beasley Johnson, director of the San Mateo County Human Services Agency. “But they reached them just by bringing in fresh eyes and adopting a simple, easy-to-use approach. We are looking for that.”

She said the partnership can be tricky: “You have to be willing to be very open, to let them see everything — the good, the bad, the ugly — and do what they do.”

San Mateo County has one of the lowest rates of food-stamp participation in the country, largely because of an application process that is maddeningly unfriendly. The result is nearly $50 million in unused aid, according to California Food Policy Advocates, an advocacy group.

Any changes in the process would require 18 agencies to overhaul their data-processing software.

Among those Code for America sent to tackle the problem was Belyamani, who was inspired to take a leave from his cushy job at AOL after hearing a talk about innovation in government by Todd Park, the Pahlka mentor she is now working for in Washington. The talk opened his eyes to how his particular skill set could be used to effect change.

The public sector, though, has proved a bit more cumbersome to navigate than AOL.

“The whole thing is very frustrating,” the hacker said of all the red tape involved in trying to tweak the food stamp application, after a meeting with a local aid group in March.

A month later, Belyamani’s team was back at the drawing board on that job, in the Code for America loft in San Francisco. They were feeling more upbeat after tapping some of the San Mateo County community’s creative minds and fellow hackers for help.

Some sat barefoot on mismatched furniture. Large sheets of drawing paper filled with random scribbles and Post-It notes were tacked on the wall next to Belyamani and another member of the San Mateo County team, Sophia Parafina. They were the remnants of a “hackathon” at Stanford, in which the public was invited to brainstorm about food stamp enrollment and other food challenges.

“What makes these things successful is not that the people involved can code,” said Parafina, a geographer and mapping wizard. “It is that they have an understanding of the policies or problems.”

At 48, Parafina is one of the older hackers brought on by Code for America. Her past includes a stint with a venture-capital firm that funded startups looking to do business with the CIA, building and selling her own company — and, she says, a lot of time watching Mexican rodeos.

In San Mateo County, the fellows wanted to create a program that would ask simple questions of food-stamp applicants and use the answers to automatically fill in the complicated government form.

Also on the table: an easily searchable guide — sort of a Zagat for social services — that would provide such details as whether a food bank serves hot meals. And an app for retailers with extra food on hand to quickly locate food banks in need of it. Another to guide users to public fruit trees and gardens for foraging.

“There is something about this generation that assumes all problems are, if not solvable, at least hackable,” Pahlka said. “They have decided that complaining is less useful than just getting in there and fixing the system.”

One Response to Hackers, food access and government – an unlikely partnership – from the Los Angeles Times