Posted on January 13, 2014 by Office of Public Affairs 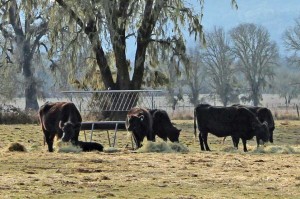 Area ranchers battling the worst drought ever recorded are facing some tough decisions-sell off some of their stock or spend money to buy feed and water to keep the herd going.

The Little Lake Valley should be a sea of green grasses this time of year instead the fields are covered in the brown stubble left after last year’s hay harvest. Many ranchers depend on the native grasses to feed their herds and the 2.88 inches of rainfall the Willits-area has received since Oct. 1 wasn’t enough to jump start the hay crop.

“Those should already be up by now and providing sufficient feed,” said Mendocino County Agriculture Commissioner Chuck Morse. “The situation is dire.”

In response to the crisis, the Mendocino County Board of Supervisors declared a water emergency and “imminent threat of disaster” from drought conditions Jan. 7 during their first meeting of 2014.

“There’s just no feed. The grass isn’t growing,” said Diane Ford who, with her husband Gary, runs a cattle operation in the valley. “So we’re definitely getting rid of animals because we have nothing to feed them.”

“It’s scary. I’ve lived here all of my life and I’ve never seen it this cold and the lack of rain. I’ve just never seen anything like it.”

It’s scary because the 105 acres that we grow of hay, we’re dependent on the winter rains,” Cox said. “That’s what grows all those beautiful grasses for our girls. We have never seen the ranch so dry, ever.”

“The normal hay supplies that folks use to get them through a normal year (is gone),” said Devon Jones, executive director of the Mendocino County Farm Bureau.

Ranchers are buying hay from Oregon and Nevada as local supplies run out, according to Jones who notes the shortage of feed is elevating prices. The potential loss of this year’s hay crop could push ranchers further to the brink.

“They’ll be going into next year with nothing in the barn,” Jones said.

Winter rains also fill the county’s stock reservoirs, many of which are now dry. Wells and natural springs are also drying up according to Jones who said springs in Laytonville and Covelo that have historically never gone dry are now very low or dried up, forcing ranchers to truck in water.

The double hit to ranchers’ finances has the potential to push smaller ranches out of business. Mendocino County received a drought declaration from the United States Department of Agriculture last year, giving ranchers access to low-interest loans to cover the added expense of surviving the water crisis. The program ends in April. Morse said he will pursue the designation again and plans to include fruit crops in the request also.

“Last year, my drought designation was only for the livestock and hay people, this year we’re looking at our winegrape producers county-wide,” he said.

Even with financial assistance Jones said sources of feed and water are beginning to run low and could pose a challenge in the coming months.

“We’ve got hay for the animals through the winter but it’s the summer,” Cox said. “It’s the cutting of the hay that will hopefully start May or June. If we don’t get the rain, we’re not going to have the grass out there to cut for them.”

Commissioner Morse feels the damage has already been done.

“This could affect our ranching operations for years to come,” he said.