From Huffington Post: This Living, Sustainable Mushroom Building Could Be the Future of Green Architecture

Posted on July 8, 2014 by Office of Public Affairs 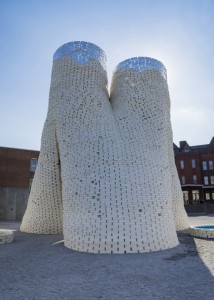 This summer marks the 15th year of The Museum of Modern Art and MoMA PS1’s Young Architects Program, which challenges young architects to design innovative projects that bring new possibilities to our understanding of sustainable architecture. The eco-friendly structure that reigns victorious serves as a temporary urban shelter for MoMA PS1’s Warm Up summer music series.

This year’s winner, designed by David Benjamin of New York architects The Living, is, simply put, a mushroom tower. And this mushroom tower could change the future of environmental design. The cylindrical tower isn’t quite manufactured but grown, thanks to its entirely organic material made from cornstalks and the root-like structures of mushrooms, called mycelium. Up until now, these mushroom roots, created by Ecovative in 2007, have mostly been used as a packaging material. But their purpose in art and design is about to shift considerably.

Here’s how it works: To create the brick substitute, the mixture of cornstalk and mushroom root is left to harden for several days into a sturdy solid through an entirely natural cycle requiring nearly no waste, nearly no energy and nearly no carbon emissions. Essentially, the architects channel the “biological algorithm” of mushroom roots to grow a building from the ground up. The entire growing process takes around five days. ArchDaily described the resulting wonder as resembling the “intersection of three arteries — blown up a few thousand times.”

The wildly creative engineering feat, essentially creating a new ecosystem of design, is named Hy-Fi. “Hy-Fi is a reference to a kind of technical term called hypha, which is the type of living organism that we use to manufacture the building blocks of our project,” designer Benjamin explained to The Creator’s Project. “In this project, we’re using a living organism as a factory. So the living organism of mycelium, or hyphae, which is basically a mushroom root, basically makes our bricks for us.”

At the top of the tower you’ll see a row of shiny blocks, which serve as the molds in which the bricks grow. Their light-refracting film coating, invented by 3M, directs light back into the towers. This serves to draw cool air in at Hy-Fi’s bottom layers and push it out on top, creating a delightful microclimate. The mirrored top layer is also a sly nod to New York architecture. “We wanted to acknowledge the red brick structures and glass towers of New York City, but then turn them inside out,” Benjamin explained to ArchDaily.

When Warm Up comes to a close and the tower is disassembled, the molds will be returned to their makers for further research. As for the rest of the structure, it will return to the place from whence it came, the local earth of NYC. Yup, it’s compostable. “One of the things that we’re experimenting with in the project is a kind of local economy of materials. Everything from the project, in its entire life cycle, comes from a 150 mile radius,” Benjamin told Creator’s Project.

“Then at the end of the lifespan of the temporary structure, we’re going to compost it, again, right here in New York City, and then return that raw material to local community gardens and tree planting. In that sense we’re experimenting with a local version of architecture similar to some experiments with the local food movement.”

Well, there you have it. Hy-Fi is more than just a mushroom tower, it’s a challenge to the very limits of sustainability, an expansion of what bio-design is and can be. On the other hand, we can’t wait to party there during Warm Up. Listen up youths, this may be your only chance to dance the day away under the benevolent shelter of a tubular ‘shroom shelter. We highly suggest you take advantage. Hy-Fi will be open to visitors until September 7, 2014.

This entry was posted in Agricultural Education, Climate Change, Environment. Bookmark the permalink.