Posted on June 1, 2015 by Office of Public Affairs 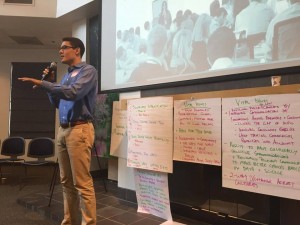 That question was posed Friday to a room of UC Davis students, community activists, farmers and Monsanto executives at a think tank-style event on campus. About 70 attendees were given Post-its, pencils, giant notepads and one challenge: Devise innovations that would produce more nutritious food with less waste while also conserving agricultural land.

It’s a hefty task for a four-hour workshop, but individual groups came up with a spectrum of global solutions, including a localized mobile app for peer-to-peer support among farmers, a tiered pricing system for selling less-than-aesthetically perfect crops and ways to make the most out of withering produce, like selling smoothies.

The discussion was hosted by Net Impact, a national nonprofit that encourages students and professionals in its 300 individual chapters to make positive impacts on social and environmental issues. The “Nourishing Nine Billion” conference headed by the UC Davis Net Impact chapter this week was the second of its kind in the nation, following a similar pilot at Tufts University.

Providing feedback for the students’ presentations were leaders from the UCD institute and experts from biotech company Monsanto, which made headlines recently for its controversial work on genetically engineered seeds. Other representatives were from Freedom from Hunger, a nongovernmental organization fighting malnourishment in 19 countries, and the California Department of Food and Agriculture.

“Our goal is to crowdsource solutions,” Luu said. “(World hunger) is an issue many of our students are passionate about. There’s no one owner of the problem and there are a lot of right answers. The solutions are complex and global in scope. It’s going to take some collaboration.”

Among the themes discussed Friday were reducing food waste, changing diets, integrating nutrient-rich food into cultures and increasing access for the poor. Attendees were given two minutes to present ideas before receiving feedback from peers and the panel of experts.

Marlin Edwards, global vegetable technology lead for Monsanto, said UC Davis students are perfectly situated to make sustainable change in the way food is grown, processed and distributed worldwide, given the quantity of food produced in the region.

Although students at Friday’s event did not present solutions using genetically modified seeds, many scientists believe world hunger can partly be solved by that technology, Edwards said.

“They are a wonderful tool amongst many to help farmers be successful and ensure food supply,” he said. “We need to collectively, in forums like this, help address consumer apprehensions and make sure they’re armed with information about agricultural alternatives and what the relative risks and benefits are.”

Jessica Chiartas, a soils and biogeochemistry doctoral candidate, said there are many other techniques the world’s farmers can build on, such as crop diversification, regeneration and waste conservation, before moving to genetically engineered crops.

“There are some situations where diversification alone can accomplish the same goals that people go for with genetically engineered (seeds),” she said. “I don’t know that that needs to be the first thing in our tool box.”